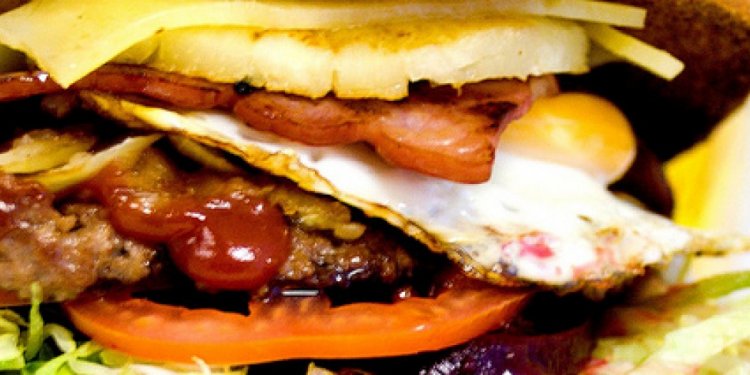 IN ADELAIDE IN THE 1950s, my grandmother was our family cook, turning out such standards as shepherd's pie, lamb chops, and apple pie and custard. She cooked tripe in white sauce as a treat. I liked it.

An after-school favourite was a South Australian speciality, jubilee cake. This was a teacake with dried fruit, which was iced and sprinkled with coconut. Sliced and buttered it was the best cake in the world.

Her cooking now seems plain, but unlike many people in the world at that time, she had access to quality ingredients, many of which were gathered from our Adelaide backyard. Back then the choice in milk was simply the number of pints ladled by the milkman into our billy early each morning.

Bread was delivered by cart, too, and the greengrocer would fill an order from a large green van. Men used special tongs to carry huge, dripping blocks of ice down our gravel drive to the ice chest in the laundry.

My grandfather's crucial contribution, other than ensuring that I sat with a straight back, was telling stories around the kitchen table.

An Australian invention, the flat white has been embraced across the world as the perfect balance of crema and coffee. (Photo credit; Asim Ihsan/flickr.com)

Today, Australian meals are more diverse than ever, influenced by aisles of inexpensive ingredients, a platter of cultures and a menu of resurgent interest in food.

Unlike other societies with a dominant agrarian history, we have inherited no cuisine in
the traditional sense. Australia's food history has instead been dynamic, urban, industrial, science-based and capitalist-driven.

In terms of the most popular Australian evening meals, simply cooked 'meat and three veg' still wins out in industry surveys, but an Asian dish - a stir-fry or a chicken curry - is always included near the top, and annual sushi sales (116 million serves) are starting to rival the traditional meat pie (177 million).

In my youth, we each ate about 50kg of beef a year. Now we eat more chicken (38kg, compared with 33kg of beef). Lamb and mutton consumption has fallen to one-fifth of earlier levels (now 14kg), but - with 25kg of pork, ham and bacon, and
other meats - we still eat three times more meat than the world average.

Health experts tell us only one in 10 Australian adults consumes sufficient vegetables.

True, we eat an average of 62kg of potatoes a year, but mainly as chips. During 2011, children aged between 14 and 17 together ate 44.1 million serves of hot chips. That was on top of 30.2 million hamburgers.

Of the more than 0 billion we spend on food each year, a quarter is spent in restaurants, cafes and takeaway shops.

Coffee consumption alone is enough to give anyone the shakes, doubling since 2004 to almost 3 billion cups savoured in cafes and restaurants each year. The world is fast taking to Australia's greatest gastronomic invention (perfected in New Zealand), the flat white.

We buy takeaway food an average of 4.1 times a month, and eat out 3.5 times a month, but four out of five Australian evening meals are still home-cooked. In a 2009 How Australia Cooks Report commissioned for Westinghouse, steak or chops with vegetables topped the list of the most popular evening meals, followed by a roast or baked dinner.

Spaghetti bolognaise or other pasta dishes came third, and a stir-fry fourth.

The diversity of 'Australian' cuisine

Such is the proliferation of foods and techniques that it may seem nonsensical to search for a distinctively 'Australian' cuisine, especially in a country where the climate ranges from cool maritime to tropical. However, it's true that what we eat today has been distinctly shaped by what we prepared earlier.

"No other country on earth offers more of everything needed to make a good meal, or offers it more cheaply, than Australia; but there is no other country either where the cuisine is more elementary, not to say abominable, " said Edmond Marin la Meslée, founder of the Geographical Society of Australasia, in his 1883 book, L'Australie Nouvelle.

His judgement was not unusual. Many people over two centuries have deplored our cuisine, and even the abundance of food was in doubt at the beginning of colonisation.

Aboriginal inhabitants were mainly hunter-gatherers, employing an array of light-weight techniques depending on habitat, rather than farming crops and domesticating animals in the way that European explorers were used to. English seafarer William Dampier observed in 1697, "The earth affords them [Aboriginals] no food at all.

There is neither herb, root, pulse nor any sort of grain for them to eat that we saw." Blind to what was in front of them, the colonists adopted virtually no indigenous foods. Kangaroo meat was rarely touched.

The only real exception was fish, with numerous types highly desired. Oysters and lobsters (and their inland equivalents, yabbies) became mass favourites. The vast list of plant species was ignored, with the exception of the macadamia and novelty use of fruit such as quandong. Instead, the colonists arrived with an industrial approach, initially aimed at growing imported foods.

First fleet rations included typical English foods such as bread, oatmeal and cheese, as well as the seafarers' salted meat, dried peas and vinegar (which was thought to protect against scurvy).

But the settlement was quickly reduced to even simpler rations - salt meat, flour, sugar, tea and excessive spirits. These were readily transported, often coming from China, India and slave-worked plantations on the other side of the globe.

Weekly pay was often 4.5kg of meat, 4.5kg of flour, 1kg sugar and 100g of tea, so the repetitive campfire meal was damper, billy tea and a slab of meat. Some boasted about "meat three times a day", although the protein quickly went off and was notoriously overcooked.