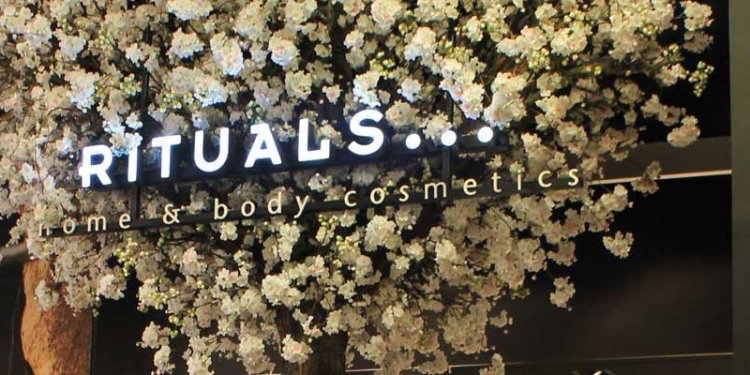 Rituals Cosmetics is the first brand in the world to combine home & body cosmetics. With its product line – from luxury body and facial creams through to precious mineral make-up, scented candles and pure tea – Rituals Cosmetics inspires people to transform their daily routines into beautiful, meaningful moments. And not only the product range has been expanding over time, the number of stores around the world has been growing each year as well. In addition to its own retail shops, the brand is also available through shop-in-shops in leading department stores, airlines and hotels. Furthermore, Rituals Cosmetics is available in duty free stores across Europe’s major airports and luxury cruise liners and the brand has also launched its own City Spas. The home and body cosmetics concept, developed by founder Raymond Cloosterman, has become an international success story in just 15 years.

Global presence
Following the launch of the very first Rituals Cosmetics shop in Amsterdam’s Kalverstraat in 2000, almost 400 stores have opened in the Netherlands, Belgium, France, the United Kingdom, Germany, Spain, Italy, Portugal, Croatia, Czech Republic, Lithuania, Sweden, Brazil, the United States of America and now also Australia. Rituals Cosmetics aspires to open 1, 000 stores around the world within the next ten years. By the end of this year (2015) the cosmetics brand operates nearly 400 stores worldwide, over 1000 shop-in-shops and five City Spas, in over 20 different countries. Rituals Cosmetics shop-in-shops can be found in leading department stores such as Barneys New York, John Lewis, House of Fraser, El Corte Inglés and de Bijenkorf. The brand supplies specially designed amenities to over 850 boutique hotels in sixteen different countries.

Roots and inspiration
Raymond Cloosterman conceived and developed Rituals Cosmetics under the umbrella of Unilever until the year 2000. His creative team of professionals from around the world, including an anthropologist and leading perfumers, set up an ambitious global brand with The Netherlands as a trial market. Rituals Cosmetics was the first brand in the world to combine care for your body with care for your home. The brand offers a range of more than 400 home and body care products. Each item has a specific link to an authentic Eastern tradition, such as the shaving tradition of the Samurai or the Japanese celebration of new life, which Rituals Cosmetics has incorporated in the Sakura collection.

Philosophy
The idea to ‘Transform everyday routines into more meaningful moments’ lies at the heart of the Rituals Cosmetics philosophy and forms the basis for each of its products. Simply by taking time out of our busy lives to enjoy a warm bath with candles and oils, savouring a cup of refreshing tea, or by pampering ourselves with a mini treatment at home, we can help create a meaningful, memorable experience during the rare moments of ‘me time’. Enjoying the small pleasures in life, combined with the brands’ ‘slow shopping’ attitude, encourages shoppers to de-stress, enjoy and pamper themselves. By offering customers a cup of soothing herbal tea or a complimentary hand massage whilst they test the products in store, they are given the opportunity to enjoy the moment.