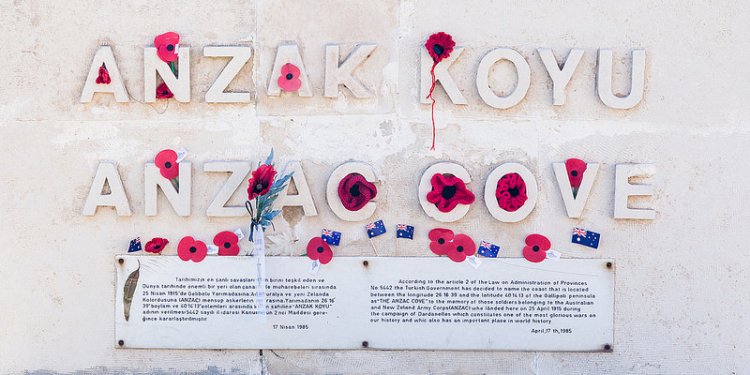 The red poppy has become a symbol of war remembrance the world over. People in many countries wear the poppy to remember those who died in war or who still serve. In many countries, the poppy is worn around Armistice Day (11 November), but in New Zealand it is most commonly seen around Anzac Day, 25 April.

The red or Flanders poppy has been linked with battlefield deaths since the time of the Great War (1914–18). The plant was one of the first to grow and bloom in the mud and soil of Flanders. The connection was made, most famously, by Lieutenant Colonel John McCrae in his poem 'In Flanders fields'.

In Flanders fields the poppies blow
Between the crosses row on row,
That mark our place; and in the sky
The larks, still bravely singing, fly
Scarce heard amid the guns below.

We are the Dead. Short days ago
We lived, felt dawn, saw sunset glow,
Loved and were loved, and now we lie
In Flanders fields.

Take up our quarrel with the foe:
To you from failing hands we throw
The torch; be yours to hold it high.
If ye break faith with us who die
We shall not sleep, though poppies grow
In Flanders fields.

McCrae was a Canadian medical officer who, in May 1915, had conducted the funeral service of a friend, Lieutenant Alexis Helmer, who died in the Second Battle of Ypres (Ieper). Distressed at the death and suffering around him, McCrae scribbled the verse in his notebook. In a cemetery nearby, red poppies blew gently in the breeze – a symbol of regeneration and growth in a landscape of blood and destruction.

McCrae threw away the poem, but a fellow officer rescued it and sent it on to the English magazine Punch; 'In Flanders fields' was published on 8 December 1915. Three years later, on 28 January 1918, McCrae was dead. As he lay dying, he is reported to have said ‘Tell them this, if ye break faith with us who die, we shall not sleep.’

Many people were moved by the pathos of 'In Flanders fields'. Among them was Moina Michael (1869–1944) who worked in a YMCA canteen in New York. Two days before the signing of the Armistice (11 November 1918), she wrote a reply to McCrae: 'We shall keep the faith'.

Michael set herself a mission: to have the red poppy adopted in the United States as a national symbol of remembrance. The American Legion adopted it at its annual convention in September 1920. Attending that event was Madame E. Guérin who, along with Michael, was responsible for making the poppy an international symbol of remembrance. Both were known at the time as ‘The Poppy Lady’.

Guérin saw the potential to make and sell poppies, putting the proceeds towards the welfare of veterans, their families and poor children. For the next year or so Guérin and others approached veterans’ groups in many countries, urging them to adopt the poppy as a symbol of remembrance.

The Returned Soldiers’ Association planned to hold its first Poppy Day appeal around the time of Armistice Day 1921 as other countries were doing. The ship carrying the poppies from France arrived in New Zealand too late for the scheme to be properly publicised. The association decided to wait until the next Anzac Day, 1922.

The poppies went on sale the day before Anzac Day. This first Poppy Day appeal was a huge success. Many centres sold out early in the day. In all, 245, 059 small and 15, 157 large poppies were sold. Of the £13, 166 raised, £3695 went to the French Children’s League to help relieve suffering in the war-ravaged areas of northern France. The association used the remainder to assist needy, unemployed returned soldiers and their families; that tradition has continued.

The popularity of Poppy Day quickly grew. There were record collections during the Second World War. By 1945, 750, 000 poppies were being distributed nationwide, which equates to half the population wearing the familiar red symbol of remembrance.

New Zealand’s supply of red poppies has been sourced both overseas and locally. The association began producing its own poppies in 1931, with disabled former servicemen in Auckland and Christchurch making them. The Christchurch RSA is still responsible for the manufacture of poppies, which are now made of paper rather than cloth.

Rationing and restrictions during the Second World War affected the making of poppies. Government actually relaxed its restriction on the importation of cloth from Britain so that poppies could still be made. By this time, ladies’ committees or women’s sections of the RSA had taken a key role in the making (and sale) of poppies. In 1936, a ladies’ committee from Wellington made 20, 000 poppies for Poppy Day.

In New Zealand the poppy is most often worn around Anzac Day. Since 1927 Poppy Day itself has been marked on the Friday before Anzac Day (unless it falls on a Good Friday) with the appeal going through to 25 April. Poppies still symbolise remembrance, and New Zealanders want to show this at other times as well as on Anzac Day. At major commemorative events, at military funerals and at war graves and cemeteries in New Zealand and around the world, the red poppy can be seen.