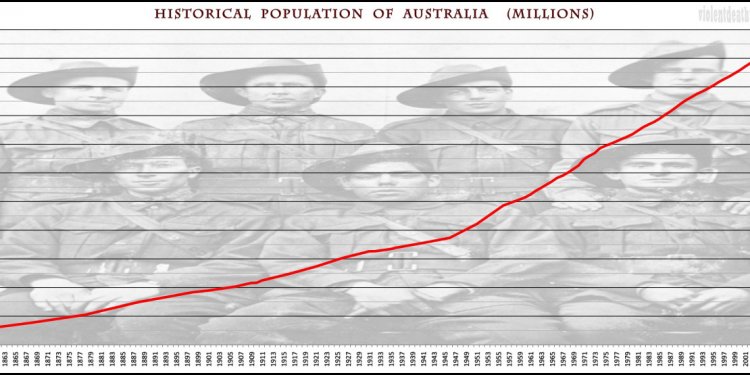 As they often do, a few days before Christmas, the ABS released their June Quarter 2014 update of Australian Demographic Statistics. It shows that in the 2013-14 financial year, Australia’s population grew by 1.6% (365, 000 people) to 23, 490, 700 people. But the interesting stuff is in the details as usual!

Here is a chart of Australia’s population vs building approvals for the last 17 years.

It shows that building approvals in Australia have actually responded to population growth, and 2014 hit nearly 200, 000 new dwellings, the most in 20 years. Population growth overall was down slightly, at 364, 900 people. But this is still strong in historic terms.

Net overseas migration was down slightly, to 212, 000. This comprises about 492, 000 arrivals and 270, 000 departures. So it’s not all one way migration! But overseas migration makes up 58% of Australia’s population growth, the remaining 42% being natural increase (more births than deaths).

But the really interesting info is at the state level.

Western Australia is still the fastest growing state, but the growth is rapidly coming back to the national average. In 2013/14, WA grew by 2.2%, to a national growth rate of 1.6%. Victoria continues to grow strongly, at 1.9%, but the real story here is NSW. Its growth rate is up to 1.5%, almost the national average, after years of low growth. And for the first time in 5 years, NSW added more people than Victoria. Maybe Sydney will be Australia’s largest city for a while yet?

This is mainly driven by a big drop-off in NSW interstate migration, coupled with an increase in overseas migration. NSW added a net 73, 000 migrants in 2013-14, up from around 50, 000 just 3 years ago. And while it’s still losing people interstate, that figure fell to a loss of -6, 857 people, the lowest level since 1981. NSW in recent years has typically lost 20-30, 000 people per year interstate.

And Western Australia’s mining boom led population boom seems to be tapering off. International migration is down from 51, 000 to 32, 000 in a year – still relatively high in historic terms though – while net interstate migration only just stays in positive territory, about 1, 000 in 2013-14 down from 8, 000 a year ago, and 11, 000 the year before that. In fact in the last quarter, WA recorded a very small net interstate migration loss.

So it seems the end of the mining boom really is having an effect on Australia’s population, while NSW is doing a lot better economically, growing population and building again, after years of low growth.