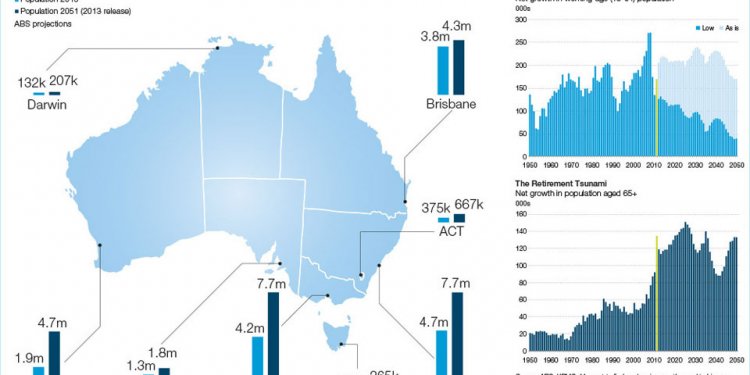 Australia is one of the most urbanised nations in the world, with an oft-quoted figure of 85% of the population living within 50km of the coast of our very large continent, with vast empty areas in the middle. My recent blog on the top 50 cities in Australia gathered a lot of interest, a reflection of the reality that most of us live in the larger centres, areas which feature on this list.

But how does this vary by state, and what exactly does centralised mean, anyway?

There are two ways of measuring this, using different types of geographic breakdown provided by the ABS.

“Urbanisation” – the proportion of population living in areas classified as urban – cities and large towns, built up areas, regardless of where they are located.

“Centralisation” – the proportion of population living within the metropolitan or catchment area of the largest or capital city.

These can produce quite different results. For instance, someone living in the town of Alice Springs is clearly outside a capital city by a centralisation measure, but is urban by the first measure. While someone living on a market garden in Werribee South 30km from Melbourne is in the capital city by the centralisation definition but is part of a rural population not living in a built up area by the urbanisation definition.

In this blog I will look at Centralisation, while my next blog will focus on urbanisation.

How centralised is your state? What proportion of the population is in the capital city? These definitions of Greater Capital Cities are quite wide, but as defined by the ABS they are the main economic catchment of the capital. In Sydney, the Greater Capital area extends more than 100km out into the Blue Mountains and the Central Coast. This is somewhat arbitrary but it is meant to distinguish a reasonable commuting distance, while excluding larger centres from the capital which are major employment destinations in their own right (eg. Newcastle and Wollongong are specifically excluded from Greater Sydney).

Based on the June 2013 Estimated Resident Population, Australia’s population was 66.3% centralised in 8 capital cities. This was up from 65.3% 10 years earlier in 2003, so centralisation continues to increase.

Here is how the states look:

The ACT has 100% centralised population by definition, since the entire territory is defined by the ABS as being part of Canberra’s catchment.

Apart from that, the most centralised state is the largest, Western Australia – with 78.3% of its population crammed into Greater Perth (which was recently extended to include Mandurah as part of the metropolitan area). This leaves just 21.7% of population, about 550, 000 people spread across the vast open spaces of the west!

Queensland is the only truly decentralised state, with large cities such as Cairns, Townsville, Mackay, Toowomba dragging population into the regions. However even there, it’s also worth considering a South-East Queensland/Rest of state split, which would bring Gold Coast, Sunshine Coast and Toowoomba into the centralised region, and would give us a figure of 70%, much closer to other states.

So it’s certainly evident from these numbers that Australian’s congregate around our bigger cities, and this tendency is increasing over time. Most of Australia is uninhabited or sparsely inhabited, particularly in the largest state, Western Australia.

But that’s only one part of the story. My next blog will look at “urbanisation” – how much of our population lives in urban areas of any size, compared to rural areas.

why design matters how long startup repair windows 7 where to buy road map where to buy tech fleece how much science do we know how much machine for ice cream how many teaching positions are open in texas how manufacturing overhead costs who studies science what company is worth the most why startup fail where to find company vat number which product roadmap which startup is best in india worm device where to find company financial statements whos technoblade how many design principles are applied for industry 4 0 how many tech decks are there how often factory reset iphone what system is the pancreas in where to design a logo how much company stock should i have in my 401k which system has no solution how often processing solution should be replenished why technology is important in our life where management consultant where to download project sekai how many technology companies in the world who system thinking when a manufacturer saturated the market whom synonym which startup is best where system preferences on iphone where entrepreneurial ideas come from how much equipment was left behind in vietnam who is the product beneficial for when solution of nacl and agno3 are mixed where to produce film what entrepreneur does where to startup programs how to buy a business location how much technology do the amish use how solution of problem what technology was used to build the pyramids where to set system property in java how much managers check bdo how many business hours in a year where to find engineering jobs which development is best how much businessman earn how often set up guitar how products are tested on animals where is data from system in stored where is celtic manager from where to produce is an economic problem where to study entrepreneurship why entrepreneurs are important why roadmaps fail how many manager in hotel how many development bank in nepal 2022 how many product managers at google what solution to use for window tint where from your's teacher who equipment qualification guidelines who technical officer salary who system thinking how project finance works whose forest solution how much solution for bissell little green how business works where to go london dance where solutions how much solution to put in contact case where do technology come from when design works who product catalogue where from teacher our is where to set up signature in outlook why design thinking is important who's teaching whom how many products does walmart sell when science fails where to solve math equations what are the 4 types of development who equipment management when engineering colleges will start what startup programs do i need who technology and health when project price should be discussed how often to service well who was take that's manager how many teaching positions are open in nc where to find device id why tech layoffs how tech savvy are you interview answer which solutions would you use when was startup filmed startup where is izzy entrepreneur who why teaching is important why workers unionize who set up paypal where's device management on iphone which entrepreneur had a significant impact how many tech jobs are there where to source products how many solution of linear equation where to find engineering research kenshi how many entrepreneurs in india where to manufacture kpmg who science father how often phone upgrade from where to start teaching english where to develop photos near me when solution of ni2 and nh3 where to produce in economics whom may concern
Source: blog.id.com.au