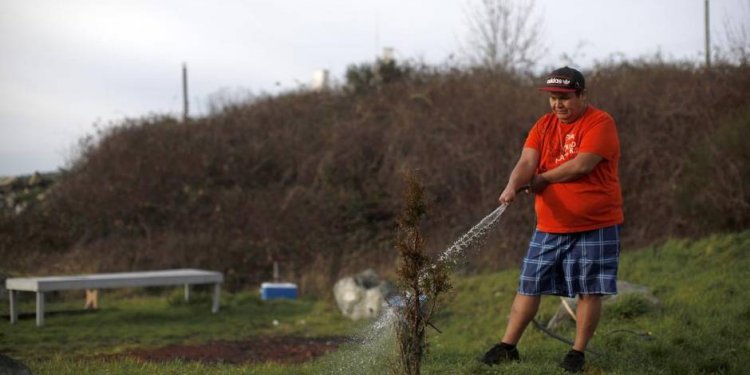 The Ditidaht First Nation’s proud claim is that its people never go hungry: Their traditional territory, covering a wide expanse of southern Vancouver Island, is rich with food for the taking – salmon and duck, mussels and berries, deer and elk.

Joseph William Thomas and Christopher John Brown, two aboriginal hunters from the urban Esquimalt First Nation – where hunting opportunities have long since disappeared – travelled to Ditidaht territory in 2013 with the intent of putting food on the table. Mr. Thomas has five children and, at that time, a total of nine people living under his roof.

Mr. Thomas believed he was exercising his treaty right to hunt on unoccupied Crown land, and the two men brought along youth from their community to take part in what they consider to be an important cultural practice.

“My own kids, they want to hunt. It is family time. Out there, you are alive again – it’s a cultural thing, ” Mr. Thomas explained in a recent interview. “When I was hunting, I wasn’t saving it for myself, I provided for my family. Every elder that eats their traditional food, they are so happy – like a child with candy – when you bring them meat.”

But in the eyes of the law those hunting trips were illegal, and twice in the space of four months they were caught poaching by conservation officers.

That might have led to a lengthy trial and, likely, convictions for the pair. Instead, aboriginal leaders seized on it as an opportunity to use their traditional customs and laws alongside the criminal justice system. They hope this case will prove to be a model for meaningful redemption for First Nations offenders.

The pair’s defiance about their treaty rights faded when they realized the legal battle was just one part of their troubles. Although they were arrested on Crown land, they had failed to seek the permission of the Ditidaht to hunt in their territory, and they had left meat to rot in one instance. On both those counts, they had brought shame and conflict to their Esquimalt Nation based on traditional conventions.

Compounding matters, the Ditidaht are stoutly in favour of conservation efforts to protect Roosevelt elk – in fact, they have joined with other Nuu-chah-nulth tribes in offering a reward for information that leads to the conviction of elk poachers.

Together Mr. Thomas and Mr. Brown faced a total of 17 charges that could have resulted in fines between , 000 and 0, 000 and up to three years in prison. The case was heard in one of the province’s First Nations courts, presided over by provincial court Justice Marion Buller. Instead of jail or crippling fines, the court and Crown counsel agreed to an unusual settlement where traditional aboriginal justice was allowed to resolve the case.

All the charges have been dropped, and today Mr. Thomas and Mr. Brown are still working to earn redemption. Neither man will hunt this year – their guns have been locked up by the Esquimalt Nation’s chief and council as part of the settlement imposed by the two nations.

Late in December, Mr. Thomas sat down for an interview at a picnic table on the Esquimalt reserve, taking a short break from carting firewood into the community’s longhouse. He and Mr. Brown are required to spend at least two days each week performing cleaning and maintenance on the reserve for one year. It is not deemed to be punishment, but an opportunity to model good behaviour.

Kids in the neighbourhood sometimes pepper him with questions when they see him cleaning up. “I explain to the children, this is my way of saying, ‘Sorry, I made a mistake, ’” Mr. Thomas said.