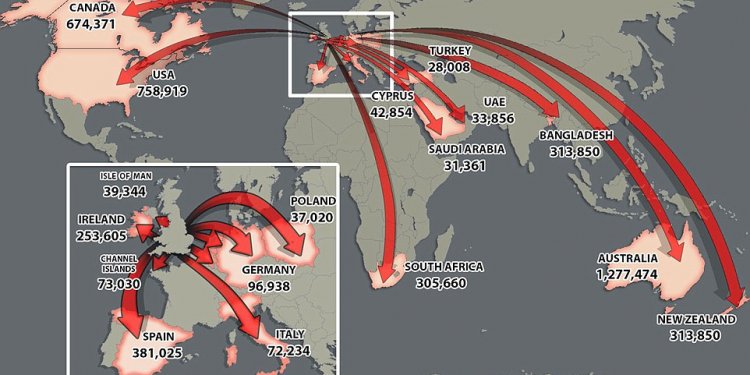 Data published in Migration, Australia updates the Census data on birthplace by considering the birthplace composition of arrivals and departures to and from the country, as well as births and deaths, in the time since. The table below shows the top ten birthplaces of Australian residents in 2000 and 2010. In terms of birthplace, about three-quarters of the population in 2010 were born in Australia (73.2%). This proportion is in decline, and is linked to higher levels of overseas migration. The Australian born population hovered around 76% from 1996 to 2004, hitting a high of 77% in 2000. Despite this, the overall number of Australian born residents increased by 11% over the period 2000-2010.

There has however, been some dramatic shifts in the birthplace composition of the Australian population. The United Kingdom (UK) and New Zealand (NZ) continue to be the main overseas born communities in Australia. This is not surprising given our historical and geographic ties to these countries. Anecdotes of driven migration from the UK, as well as the momentum from earlier arrivals, appear to have resulted in a population peak in the early 1990s when the UK born in Australia exceeded 1.2 million. Over the last decade, the number of UK born people has been relatively stable, but the increase of 5.3% over the ten years belies a slow but long term decline. Regardless, the UK born are still the dominant overseas born community in Australia, numbering 1.19 million in 2010. In contrast, the number of NZ born in Australia continues to climb, reaching 544, 170 in 2010. Given NZ’s population is just 4.37 million, this figure is quite extraordinary. There are more NZ born people in Australia than the total population of Wellington!

Although the UK and NZ born are still the dominant overseas born communities in Australia, the main change over the previous decade has been the growth of Asian born communities. This is a continuation of a trend that has been occurring since the 1980s. In 2010, China was the main non-English speaking birthplace in Australia, with its population approaching 380, 000. Between 2000 and 2010, the Chinese born population grew by 10% on average per annum, and the actual number doubled between 2003 and 2010. However even this rapid growth does not compare to the Indian born community which grew by an average of almost 14% between 2000 and 2010. Their numbers trebled between 2002 and 2010, reaching almost 341, 000. In terms of growth rates, these communities are growing faster than some of Melbourne’s outer suburbs!

The Age reported that the rapid growth of Asian born people in Australia meant that their population would soon outstrip the European born population. On a broad geographic level, this is highly likely. When all Asian countries are considered, their population was just under 2.1 million in 2010, compared to 2.42 million for all European countries. However, the Asian born population almost doubled between 2000 and 2010, compared to total growth of just 2.9% for the European born.

The shift away from European migration is also revealed in the gradual ageing of persons born in those countries, as shown in the graph below. For example, the Italian and Greek born populations, many of whom arrived as young adults in the 1950s and 1960s, are now approaching old age. In 2010, the median age of the Italian born and Greek born population was 67.5 years and 66.4 years respectively. Migration from these countries is now negligible and their populations are declining as a natural result of their mortality catching up with them. However this is much lower than the median age of the Latvian and Lithuanian born populations (74.9 and 73.6 years respectively). This was the highest of all countries and is not surprising given the main wave of migration from the Baltic States occurred in the immediate post war period. Even the UK born population have a high median age which has steadily increased since 1996 and stood at 53.5 years in 2010. By way of comparison, the median age of the total Australian population was 36.9 years.