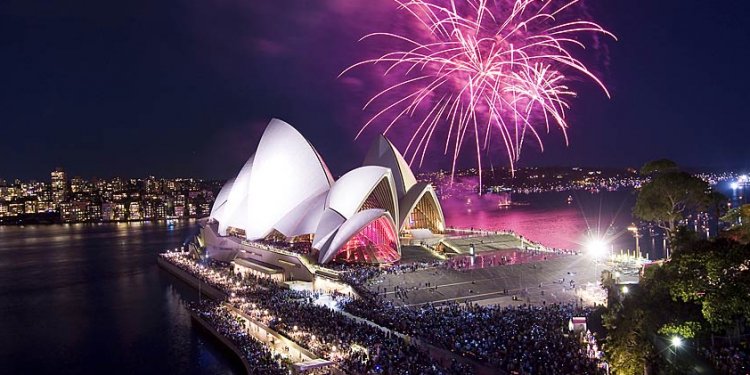 In Sydney, the start of the New Year is heralded by a huge fireworks display. It is estimated that one to one-and-a-half million people watch the display at the Sydney Harbour. In other towns and cities, smaller displays are organized by local authorities.

For many people, New Year's Day is a time to recover from New Year's Eve parties the evening before. Others use the day to travel home to end the summer vacation or to spend time with family members. People who enjoy horse racing may watch or bet on the Perth Cup. The race is run over 3200 meters (just over two miles) at the Ascot Racecourse in Perth, Western Australia. The prize money for the race totals 400, 000 Australian dollars.

Stores may be open or closed according to state laws and local custom. In the states of New South Wales, Queensland, South Australia and Victoria, there are trading restrictions on New Year's Day. In these states, many stores do not open on New Year's Day or the first Monday in January if January 1 is a Saturday or Sunday. In some areas, public transport is limited. In other areas, there are no services. There may be some congestion on roads and at airports, as people return from holidays or from relatives' homes.

New Year's Day marks the start of a new year according to the Gregorian calendar, which was introduced to Australia by European settlers. It replaced the Julian calendar, which used a year that was slightly shorter than the solar year. Over time, the seasons moved out of line with their positions on the calendar. The Gregorian calendar was introduced by Pope Gregory XIII on February 24, 1582. It was adopted immediately in some areas of Europe, such as Spain, Portugal and parts of Italy, but it took hundreds of years before it was used throughout Europe. In Great Britain, it was introduced in 1752.