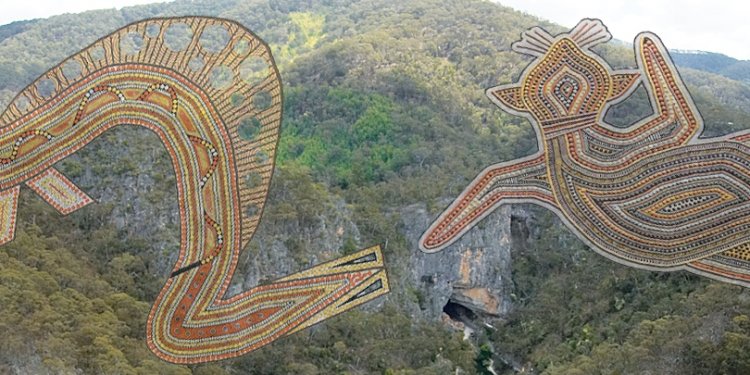 Djakapurra Munyarryun plays the didgeridoo in the "Sea of Hands" display in Sydney in 1998. The display was in support of native title and reconciliation of Australian aboriginals. (Source:AP)

Australian Aborigines migrated from somewhere in Asia at least 30, 000 years ago. Though they comprise 500–600 distinct groups, aboriginal people possess some unifying links. Among these are strong spiritual beliefs that tie them to the land; a tribal culture of storytelling and art; and, like other indigenous populations, a difficult colonial history.

Aboriginal spirituality entails a close relationship between humans and the land. Aborigines call the beginning of the world the "Dreaming, " or "Dreamtime." In the "Dreamtime, " aboriginal "Ancestors" rose from below the earth to form various parts of nature including animal species, bodies of water, and the sky.

Unlike other religions, however, aboriginal belief does not place the human species apart from or on a higher level than nature. Aborigines believe some of the Ancestors metamorphosed into nature (as in rock formations or rivers), where they remain spiritually alive.

Storytelling, Art, and the Didgeridoo

The oral tradition of storytelling informs aboriginals' vibrant cultural life. Songs illustrate the Dreamtime and other tales of the land, while dances and diagrams drawn in the sand accompany oral tales.

Books About Aborigines and Australia

In a Sunburned Country
Bill Bryson

In the Northern Territory, aboriginal art includes sculpture, bark and rock paintings, and baskets and beadwork. Rock carvings and paintings can be found in such places as Arnhem Land, Ubirr, and Nourlangie. Many aborigines earn a living through selling native artworks.

Aboriginal music is often recognizable for its most famous instrument, the didgeridoo. A wind instrument typically made from bamboo, it extends about five feet and produces a low, vibrating hum. Aborigines use didgeridoos in formal ceremonies at such events as sunsets, circumcisions, and funerals.

As a result of forced assimilation, by the late 1880s most aborigines had joined white rural and urban communities. Aboriginal people became economically marginalized and were exposed to new diseases. The consequence was massive depopulation and extinction for some aboriginal tribes.

Land and property rights fueled an important civil rights movement in the 1970s. Aborigines spoke out for equal rights, and specifically for land rights for property that had been forcibly taken by British settlers. The Aboriginal Land Rights Act, passed in 1976, became instrumental in territories with tribal associations. The 1990s witnessed further rights milestones, including government legislation that returned a great degree of autonomy, and increased wages and welfare benefits to aboriginal people.

Who are the Aboriginal…